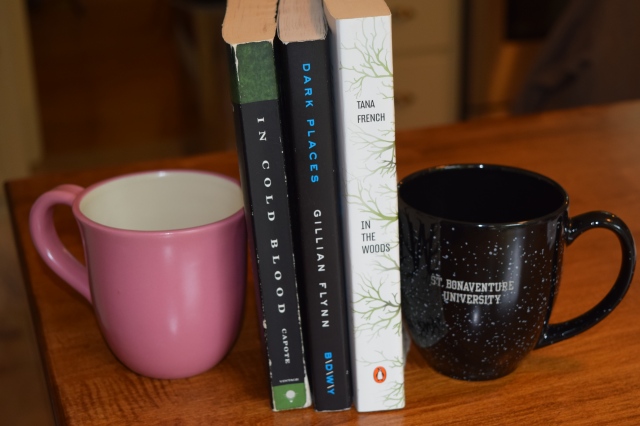 I cannot believe that I am back here again with another monthly reading post. It seems like time is going so much faster now, and I’m honestly pretty bummed about it! Summer is my favorite season. I’m not ready for it to be over. At least I have fall to look forward before the real chilly weather sets in!

This month I went for the crime-style novels. I’m not really sure why I gravitated toward them in particular, but I do tend to enjoy good dramas and thrillers. We’ve been spending almost every weekend at our camp on Lake Winnipesaukee, and one of my favorite things to do is lay out on our deck with a good book. I’ve been getting a lot of great reading time in this month, and luckily all of these books were able to hold my attention with suspense and crime. 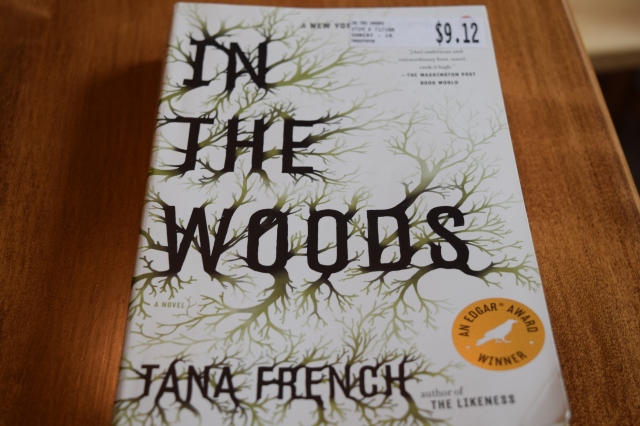 First up was In the Woods by Tana French. Here’s the summary from the back of the book: “The debut novel of an astonishing new voice in psychological suspense. In Tana French’s powerful debut thriller, three children leave their small Dublin neighborhood to play in the surrounding woods. Hours later, their mothers’ calls go unanswered. When the police arrive, they find only one of the children, gripping a tree trunk in terror, wearing blood-filled sneakers, and unable to recall a single detail of the previous hours.

Twenty years later, Detective Rob Ryan—the found boy, who has kept his past a secret—and his partner Cassie Maddox investigate the murder of a twelve-year-old girl in the same woods. Now, with only snippets of long-buried memories to guide him, Ryan has the chance to uncover both the mystery of the case before him, and that of his own shadowy past.”

The first thing that I really liked about this book is that it’s set in Ireland. So many of the books I read are set in America, which is obviously pretty familiar to me since I live here, but it’s nice to have a change of scenery every so often. I went to Ireland during a high school trip, and I absolutely fell in love with its beauty and culture. I would definitely like to go back some day, and reading more about it in this book was cool!

This book was full of twists and turns. Every time I thought I had the mystery figured out, something would happen and completely change the course of the story. That might be frustrating to some people, but I tend to really enjoy books like that. I don’t like knowing what’s going to happen and how a book will end, so I loved the suspense of this book.

I’m still not sure what to think about the book ending. Without giving the ending away, I will just say that it isn’t your typical happy ending. I kind of like that it didn’t end how I was expecting it to, but it also made me feel sad. When you’re really invested in a book, you get so attached to main characters, and you find yourself wanting what’s best for them. Either way, I still enjoyed reading this book, and I don’t regret picking it up this month.

Next on my list this month was In Cold Blood by Truman Capote. I’ll be honest, I mostly wanted to read this one because it’s considered an amazing piece of journalism. Being a journalism major in college, I felt a little embarrassed that I had never read this book before. I decided that needed to change that this month.

Here’s the summary: “On November 15, 1959, in the small town of Holcomb, Kansas, four members of the Clutter family were savagely murdered by blasts from a shotgun held a few inches from their faces. There was no apparent motive for the crime, and there were almost no clues.

As Truman Capote reconstructs the murder and the investigation that led to the capture, trial, and execution of the killers, he generates both mesmerizing suspense and astonishing empathy. In Cold Blood is a work that transcends its moment, yielding poignant insights into the nature of American violence.”

What I liked most about this book is the amount of research and background that Capote put into it. As readers, we get tons of details about each of the people involved in the crime, including both victims and criminals. It is still so insane to me that this family was murdered for such a small amount of money. It was really sad learning so much about the family in the beginning of the book, because you know that they all ended up dying. I think it did add a lot to the story though.

What was most interesting was all of the details about the killers. I always wonder what makes people commit vicious crimes like this, and in this book, Capote goes in-depth about the killers’ childhoods and what made them who they are. I still think that no matter what, they obviously had no reason to murder this random family, but it’s interesting to see what could have pushed them to commit the crime they did.

Overall, I can totally understand why this is considered such a great example of journalism.  I can only imagine the hard work and interviews that must have gone into making this novel. You can definitely tell that it was written a long time ago, but I’m a big fan of the classics so I didn’t mind it so much. I’m glad that I finally bit the bullet and decided to read the book.

And finally, last on my list is yet another crime novel. This one was called Dark Places by Gillian Flynn. You may recognize her as the author of Gone Girl, which I’ve never actually read! I’ve heard so many amazing things about it though, and after reading this one, I will definitely be checking it out soon.

Here’s the summary: “Libby Day was seven when her mother and two sisters were murdered in “The Satan Sacrifice” of Kinnakee, Kansas. She survived—and famously testified that her fifteen-year-old brother, Ben, was the killer. Twenty-five years later, the Kill Club—a secret society obsessed with notorious crimes—locates Libby and pumps her for details. They hope to discover proof that may free Ben. Libby hopes to turn a profit off her tragic history. She’ll reconnect with the players from that night and report her findings to the club—for a fee. As Libby’s search takes her from shabby Missouri strip clubs to abandoned Oklahoma tourist towns, the unimaginable truth emerges, and Libby finds herself right back where she started—on the run from a killer.”

This was another really suspenseful novel with tons of twists and turns. Like In the Woods, you can’t really figure out what’s going to happen in the end, because the story keeps changing. What I really liked about this book was how it offered perspectives from a few different characters. There are also chapters solely in the past, from the perspective of characters who end up dying. I liked being able to learn about things that you probably would’ve never known had the book been told by only the main character and her perspective.

The only negative that I can say about this book is that I sometimes found it hard to be sympathetic to the main character Libby. Even though she was at a desperate time in her life at the beginning of the book, I still didn’t understand why she was willing to sell her family out to get money. Still, she has some good moments throughout the story, and I ended up appreciating her sassy personality.

I hope you liked hearing about what I read last month. If you are in the market for crime thrillers, any of these books would be awesome options. What have all of you been reading this summer? I’m always looking to add to my reading list so feel free to share!